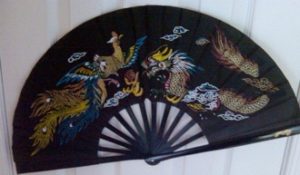 The study of the martial arts is a lifelong endeavor. By continuing my TaiJi training, acquiring knowledge in its history and application, I maintain my physical and mental health, which allows me to teach by example. In this way, I give to others the gift of health and knowledge that has been given to me by Master Li Pei Yun.

One cold evening in February 2006, I visited one of my children’s homes. As I entered the front door, I immediately noticed the sound of chaos from the inside. The family was in crisis to the point of an imminent situation. Aggressive words were being exchanged loudly between a teenager and his mother. Their verbal Judo did not seem to simmer down. Instantly, I sensed the need for this family to be redirected to avoid further escalation. I was doing an assessment on my own family.

With the keys in my hand, I waited for a few minutes by the door way. One of my defense mechanisms took over – manage the situation and control the environment.

The atmosphere had to be changed. I thought of a totally different atmosphere for this undesirable and unhealthy situation. I approached the area where they were standing and yelling. Without saying anything, I grabbed the teenager’s arm and walked out of the house. The car was unlocked and the young one sat in the passenger seat.

For some reason I started driving west. I did not have any particular destination.

I did not say one word, but kept driving, searching for a quiet and peaceful place like a Buddhist temple. A scene of a temple shrine kept popping in my mind – the small and old temple in my hometown in Okinawa, Japan. I used to go there to compose myself by reading and writing.

However, the reality was, I was behind the wheel crossing the highway 42 in the southern part of New Jersey, USA. I realized that I was driving towards the residence of this young one’s father. Suddenly, a thought popped into my mind. One of my martial arts friends told me where he was training at the time. I found the place without any difficulty. I got out of the car and the young one looked curiously and followed me.

The young one did not ask any questions. We entered the building as if I had done this before. It was the temple! “Li’s Martial Arts Center.”

The young one is my grandson, Chris. He quickly glanced at the training floor where about a dozen students were moving slowly like Okinawan martial arts dance. I knew what it was immediately. It was very familiar and natural to me. Chris sat on the bench closing his eyes, and he was holding his head with both hands. He hardly lifted up his head. I moved toward the training area, and I watched the people moving slowly to the peaceful music. Within a minute or two, a young Asian man walked toward me with a smile. He introduced himself and we spoke a few words. I instantly sensed his innately composed energy and “Sensei-ness.” I signed up for training that night. Chris joined two days later. My training for TaiJi began.

In 2007, Li’s Martial Arts Center traveled to China for an international competition. Chris and I joined the group. Chris had to stop his training after he moved to an out-of-state university. In spite of his personal and family matters, Chris continued his education and graduated with honors and earned a degree in chemical engineering.

I was born into a family of which martial arts were just part of our disciplined life style. My family has always been around me…They have influenced me in many ways by giving support, motivation, determination and a sense of continuation.

When I was in 8th grade, I learned about a Chinese great philosopher named, Consu’s (Confucius). His teachings date back almost 500 years B.C. Confucius said something like this:

When you are 15 years old you educate yourself.

When you are in 40s – you know as not to get confused.

Then when you are in 60s – you’ll finally come to enlightenment.

In the text book there was nothing about 70s, but later on I found out Confucius wrote:

“When you are in 70s, you completely recognize the order of society,

And can distinguish right from wrong.”

Confucius died when he was 72. In my case, I can say one thing I discovered — “What not to do.” Not to stop training.

Occasionally I remind myself that there are four basic elements in our lives: Earth, Water, Fire, and Wind (地水火風), Foundation, Flexibility, Energy and Intellect. Then follows the Fifth Element – “Void” (無心). I wanted to reach the point of attaining a genuine state of being Void. The two compound nouns written in Chinese (also in Japanese) comes to my mind. This is a constant reminder for me to bring myself into my starting point – the shrine / temple where I would go and hide from the world. My creativity comes from the state of being Void.

Whenever we begin to undertake something, I believe we need a certain degree of commitment. From my personal life experiences, I have been able to make a firm declaration that Responsibility and Strong Commitment lead to consistency. Continuation is the key word for my essay; it applies to everything, in general. As I reflect upon my past, I have some regrets. While there are always things I wish I could have done better or differently, I have learned over the years to accept the past and “continue” to move forward.

Continuation is power. “Continuation” and “Commitment” are ingredients that instill a strong connection among our family members, friends, and even among us martial arts comrades. I believe our root of strength comes from our periodic training; this is a discipline no matter how you look at it. We cannot escape from the desire to be in the Dōjō, the training floor with other trainees. The sense of belonging drives us to train with discipline. No matter what, the reason for training is to build up our strength, so we can continue to be consistent. This is our personal discipline. Sure, we endure, we adapt, and we just continue. Regardless of how our life style changes and where ever we go or live, our “Martial Arts Cultural Identity” is always within ourselves.

Well, at least for me, that is how it is. And that is what ultimately binds my past, present, and future together.

I personally would like to thank you all for your friendship, your support, and your enthusiasm during the past years. Thank you all for allowing this old woman to train with you at this temple. Especially, to my Sensei, PeiYun Li. 師範 李 霈雲 謝々！